Delight in your passion for volcanoes, lakes, lagoons, and nature reserves in this remarkable getaway destination.

Nicaragua luxury travel and tours by Alluring Americas can help you escape to a getaway destination truly unlike any other—for the best of reasons. From stout ancient volcanoes to an ambrosial culinary tradition, uncover why you should visit Nicaragua for your next family or romantic holiday.

Waiting for you to discover

Places to see in Nicaragua

The land of lakes and volcanoes is a secret gem few travelers know about. Yet those who venture here rave about it for years after—and who can blame them?

Nicaragua is full of natural parks, active volcanoes, protected rainforests, nature and biological reserves, and more lakes than any other nation in Central America. And it’s all waiting for you to discover.

Granada is a city of rainbow-painted cement blocks, flowering plants, and shaded parks.

Following the narrow streets, perfect for foot traffic, you can find clay tile roofs and open courtyards in this picturesque city. Especially relevant is its marked baroque-style early Moorish architecture. In fact, it was the first European city to be built on mainland America. 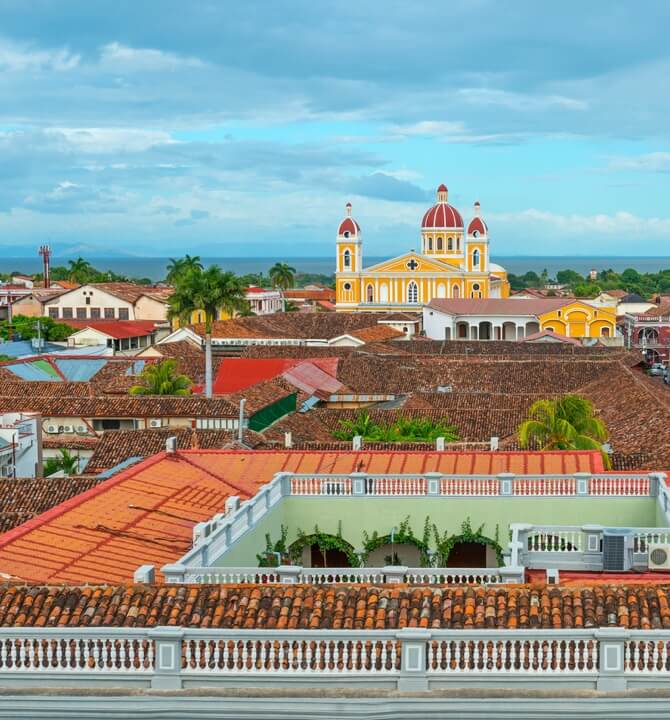 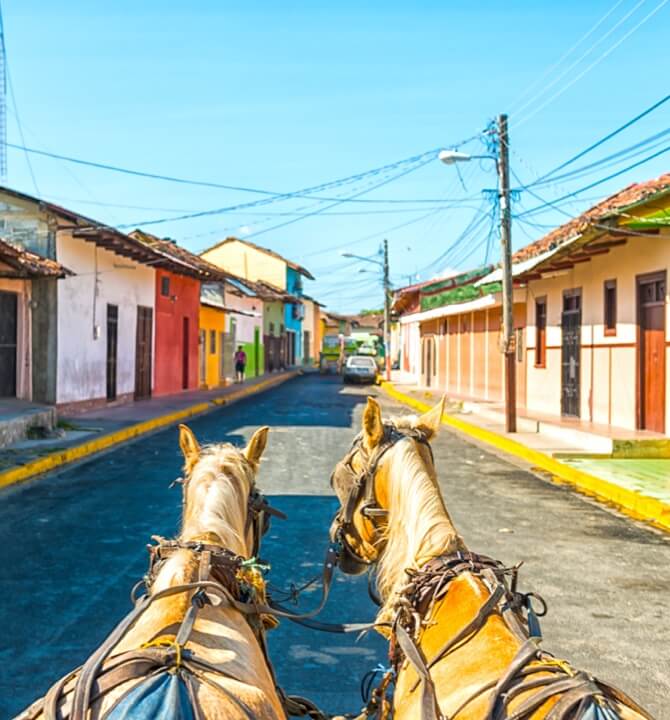 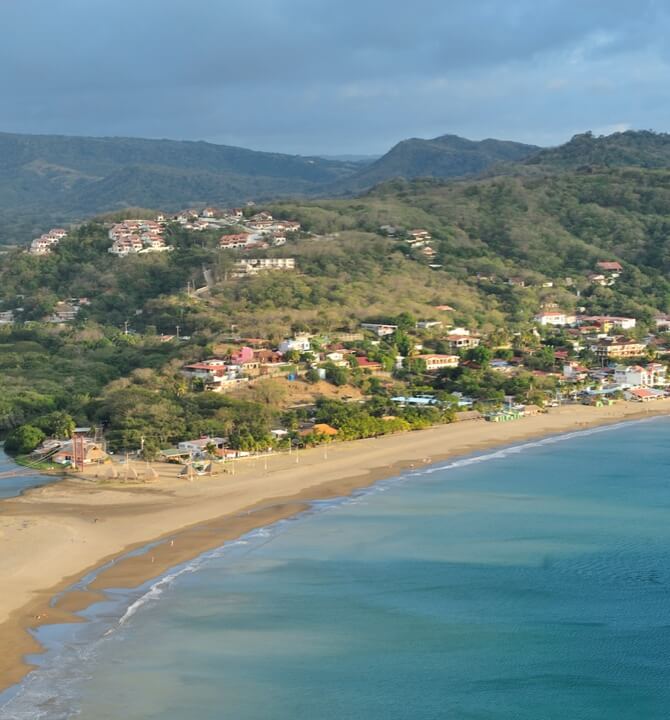 Located on the Pacific coast side of Nicaragua, this picturesque beach town is a surfer’s paradise. And when you get here, you’ll see why.

The town is positioned on a crescent-shaped bay with the breathtaking Pacific ahead and prehistoric volcanic hills behind. Also, fun fact! San Juan del Sur served as an important transit point during the California gold rush.

In León, you can tour the tombs of Nicaragua’s most celebrated poets within the crypts of the Cathedral of the Assumption of Mary. While you’re there, listen to stories of the numerous tunnels built to safely connect the cathedral with other temples during enemy attacks. In addition, if you have the stomach for it, Cárcel la 21—a jail turned museum—will intrigue those interested in the macabre.

León is a gateway to natural wonderlands and striking mysteries for travelers of all ages.

Places to visit in Nicaragua

Even if you aren’t there for the annual International Poetry Festival, you can enjoy a dazzling array of year-round activities. Find out what to do in some of our choice Nicaraguan destinations listed below:

When you’re in Granada

Encircling the city are miles of pictorial wilderness, exceedingly rich in natural beauty. Indeed, around Granada lies a vast region of fertile agricultural lands, tropical forests, and several volcanoes. And when you’re in the city, visit the malecón for a stunning panorama of Lago Cocibolca (Lake Nicaragua)—one of the largest lakes in the world.

Wildlife reserves and unspoiled beaches are numerous along the coast. Moreover, San Juan del Sur is home to several famous beaches—La Flor, Las Salinas, and El Yankee. So here you don’t want to miss out on an afternoon of beach frolicking with the kids or a seaside sangria with your partner.

But if you want a better view of the Pacific, on the summit of the highest hill, the colossal Christ of the Mercy statue quietly observes the bay below. You won’t regret making the climb.

When you’re in León

What is Nicaragua best known for? León’s locals will tell you it’s the art found in their city. Because León is home to the revolution that shaped the country into what it is today, its people celebrate art. To that end, one of the most iconic things you can do in Nicaragua is tour the streets of León for its art of the revolution.

When you’re on the Corn Islands

On the Corn Islands, kids can explore as if they were pirates, and couples can focus on each other in peaceful privacy. And if you are an experienced diver, you are welcome to discover the local marine life, colorful beyond imagination. Finally, when you’re ready to taste some local cuisine, sample some Caribbean spiny lobster from these quiet, secluded sister islands.

Big and Little Corn Islands attract those who aren’t intimidated by their rugged landscape or pioneer charm.

When you’re in Estelí

Take a day trip from this northern city known for its cigar factories to view the cliff carvings of Tisey Estanzuela Natural Reserve. They are the work of Alberto Gutiérrez Jirón, known locally as the Hermit of Nicaragua, who based his art on vivid dreams he had as a child more than thirty years ago. And when it’s time to return to Estelí, plan to rest by the Estanzuela waterfall for an ethereal slice of tranquility.

When you’re in Bosawás Biosphere Reserve

Second only to the Amazon in Brazil, this area of rainforest is a protected UNESCO site. More than six hundred bird species are found here along with jaguars, tapir, and monkeys. So if you and your family or partner are animal lovers, we recommend scheduling a wildlife tour!

Things to do in Nicaragua

While traveling in Nicaragua, you can choose your own adventure with the help of Alluring Americas. Cooking classes, artisan crafts, and Nicaragua’s finest coffee beans go a long way toward keeping travelers enchanted long after they’ve returned home.

A city of colonial structures

Many of the city’s colonial structures have been restored and converted into art galleries, boutique hotels, and cafés. While you’re in the city, be sure to stop by La Merced church, the San Francisco church and convent, and Central Park—all are popular spots for visitors to Granada.

Most of all, couples or those planning to travel to Nicaragua with kids should add the three volcanic lagoons to their itinerary. Apoyo, one of these lagoons, offers impressive crystalline waters and fishing opportunities. 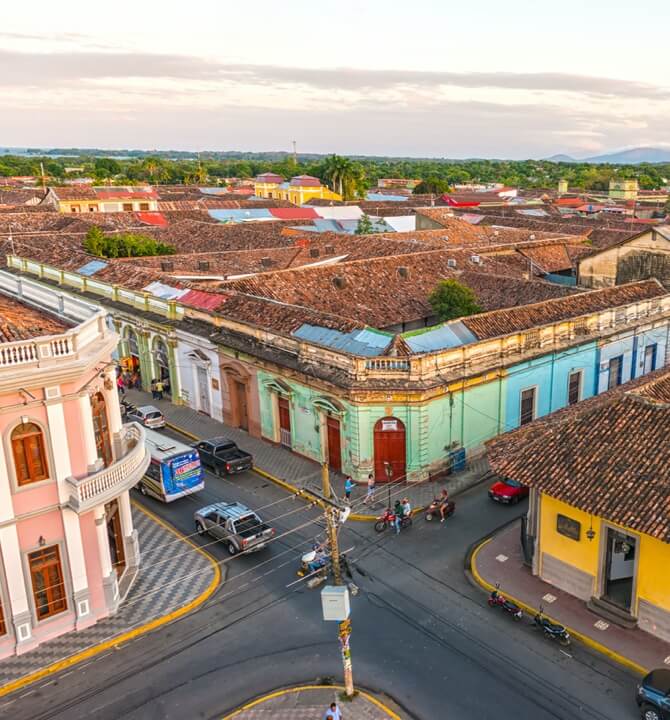 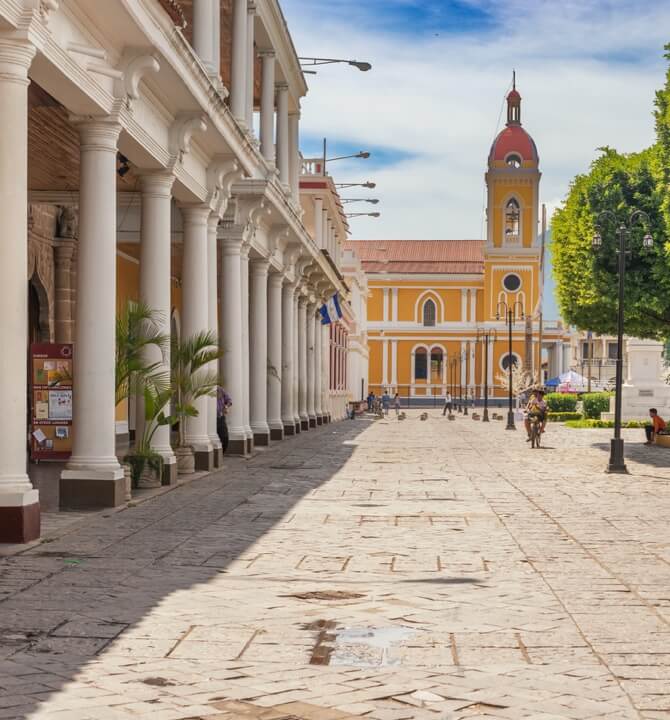 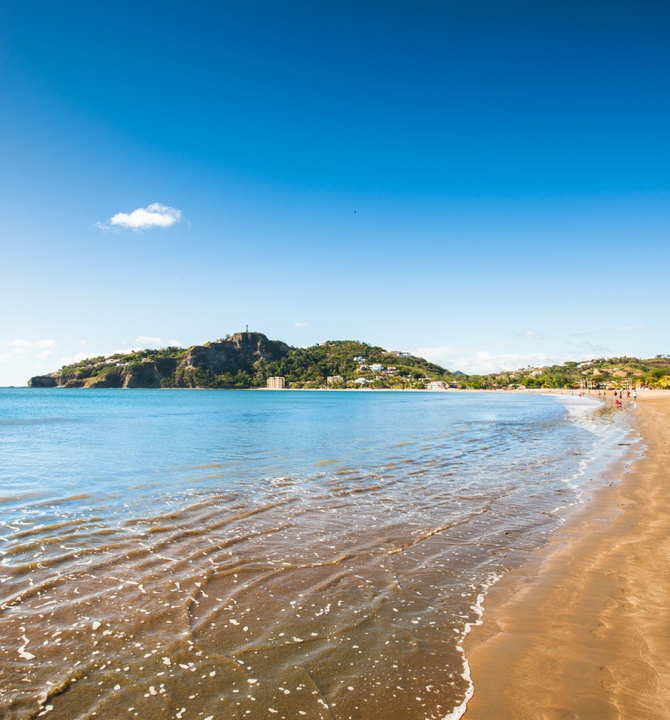 For those seeking adventure, things to do in Nicaragua abound—especially in San Juan del Sur. Here you can go surfing, horseback riding, and whale watching.

But if none of those are your thing, book a canopy tour or go zip-lining to make an Alluring Americas customized trip one to remember. Lastly, if soaking up some Nicaraguan sun is your priority, plan a private catamaran yacht charter so you can relax with your better half.

Leon offers hikes to the tops of (active!) volcanoes, where you can check for lava. Heighten the excitement by choosing to camp overnight after a sunset hike. But why visit Nicaragua to get your fill of volcanoes? Bring your GoPro—you’ll see. Here, you can even surf down a volcano.

Add volcano boarding in Cerro Negro to your Nicaragua luxury tours and travel itinerary. Cerro Negro is one of two places in the world where you’re allowed to do this.

Where to stay in Nicaragua

Tell Alluring Americas what you and your family need to be comfortable when traveling, and we will find the accommodations to fit your taste.

Where to stay in Granada

Near Granada, you can book rooms at a top eco-resort to take full advantage of the natural beauty that encloses the city. However, if you prefer to stay closer to the city center, consider a charming boutique hotel designed to meet all the needs of travelers.

Where to stay in San Juan del Sur

From ecolodges to resorts and spas, luxury is available for you and your family, and all on your terms. Due to surfing’s local popularity, you can even stay at a surf ranch.

Tourists are safe when traveling in Nicaragua, and locals are friendly. Visitors traveling from Canada or the United States do not require a visa. But since Nicaragua is a foreign country, talk to your health-care provider to determine whether any vaccines are necessary.

Where do you want to go?

After flying into Managua airport, you might want to stay overnight before traveling to coastal cities. From Managua, you can city-hop to your choice destinations—Alluring Americas can help you plan where to hop to next.

While you’re in Managua, though, you might want to consider visiting the nearby Santiago crater. The most heavily venting volcano in Nicaragua stirs here in what is the country’s first national park.

Additionally, though you may spend a day or more in each location, sharing with us what you value most when traveling can help us design your perfect vacation. Since we are here to serve you, prepare your bucket list for close scrutiny!

This is our Alluring Nicaragua—a country as rich in nature as it is in art and history. Mix family time with playtime, and immerse yourself in nature’s abundant blessings. And if you’re going for a romantic getaway with your partner, you’ll surely find solitude when exploring the largest country in Central America, where nature is sovereign. Because we handcraft private, culturally immersive experiences, your trip is perfectly curated to reflect your curiosity and passions. Whether you need a romantic getaway or an unforgettable family adventure, Alluring Americas is the luxury travel company that will lead you on the journey of a lifetime. 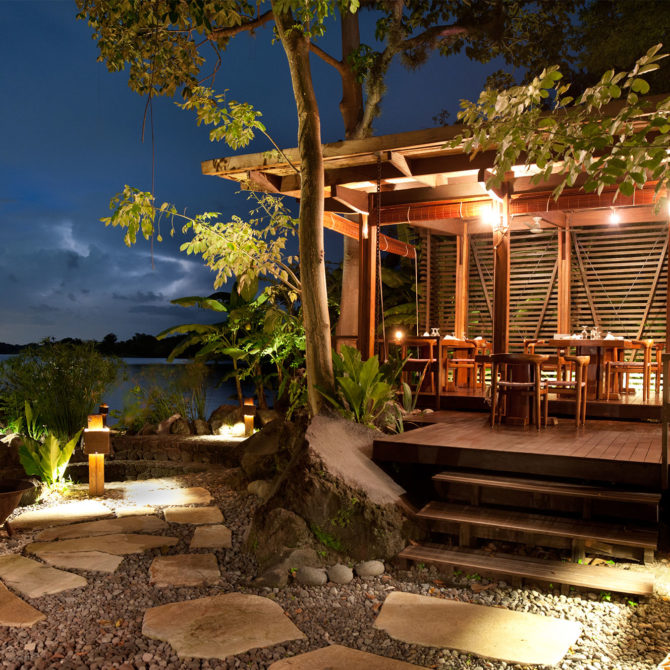 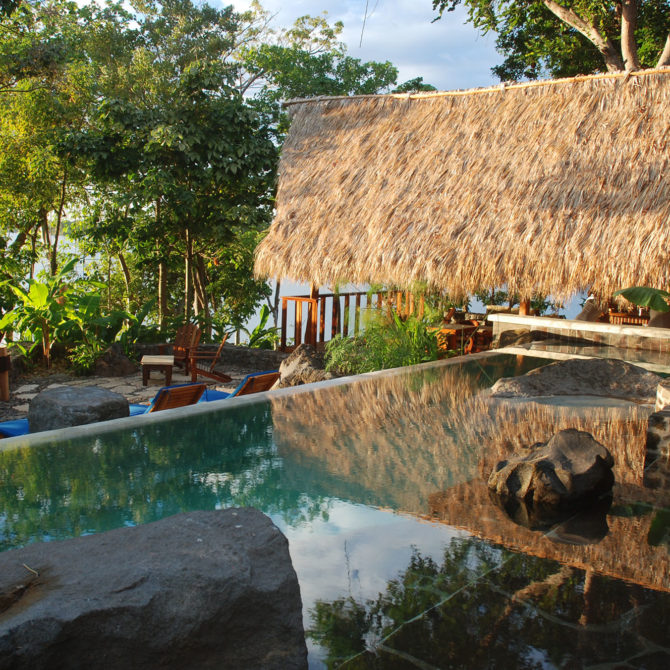 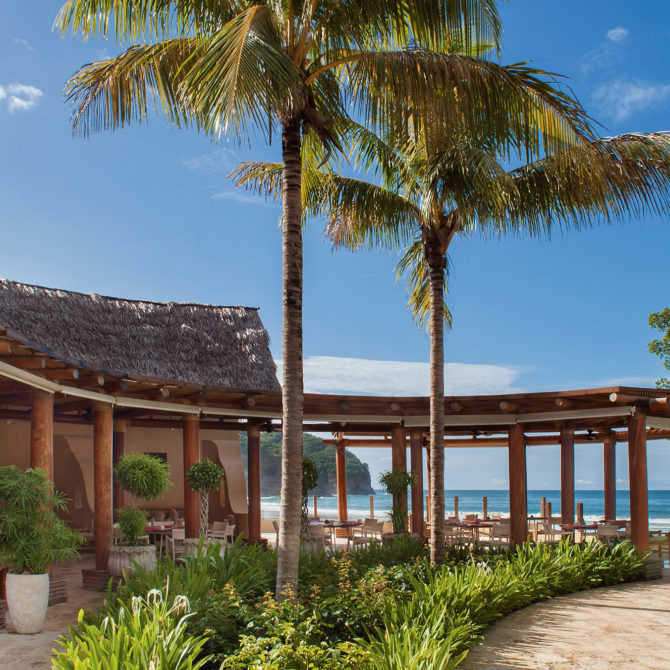 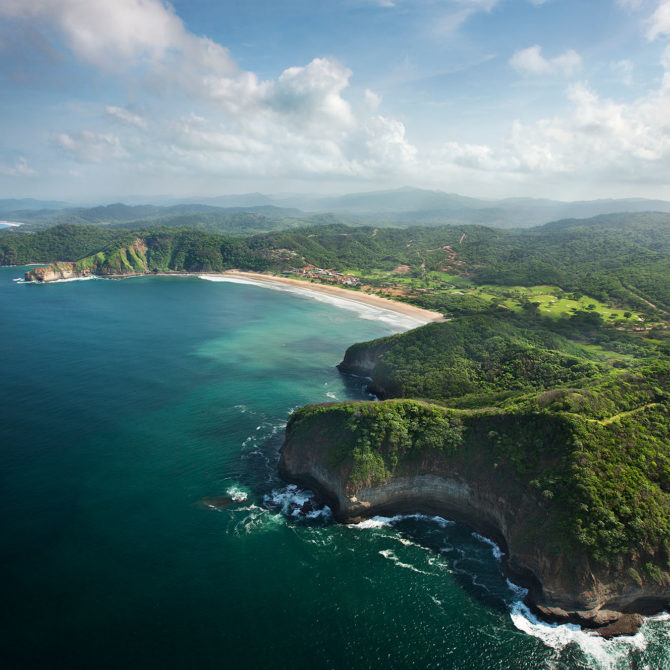 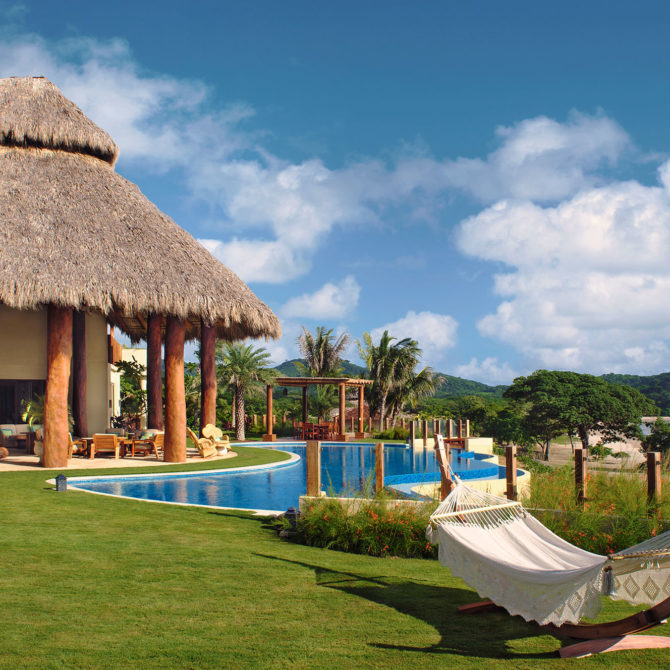 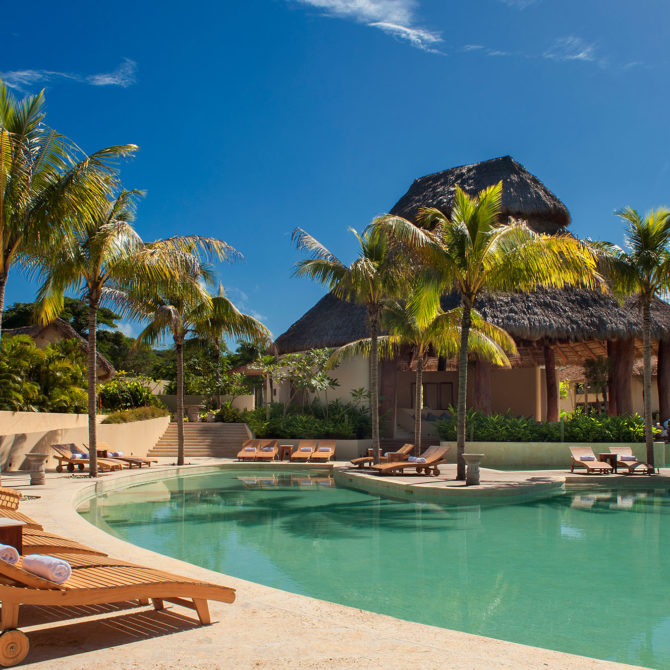