Situated in the heart of the Amazon Rainforest, northwest of the country and 1,500 miles up the Amazon River, Manaus is the capital of Brazil’s largest state, Amazonas. Its history is as exotic as its location, the city founded in 1669, with its high point during the rubber boom of the late 19th century. During that time, Manaus was a thriving port and a magnet to cultural manifestations that took place in the Amazonas theatre, today’s legendary Manaus Opera House, where the most famous singers of the era held concerts; the Manaus Floating Dock; the Rio Negro Palace (former governor’s residence); the Municipal Market, patterned after Les Halles in Paris; and the Customs House, designed and manufactured in Liverpool, England, bearing testimony to the fabulous wealth of this period. Nevertheless, the main attraction in Manaus lies outside the city, namely in the Amazon rainforest, for which Manaus has been the main access point for the last 20 years, in addition to the many lodges and cruises that have been installed in the area.

The largest remaining tropical rainforest on Earth, the Amazon rainforest extends 2 million square miles over a total of 9 countries, Brazil claiming an impressive 60%–the bulk of which lies in the Amazon basin. While the forest may appear rather uniform in physiognomy, a closer inspection reveals an astounding diversity of flora and fauna; Amazonia’s canopy, less studied than its ocean floor, believed to contain half the world’s species alone. Over 500 mammals including manatees, jaguars, tapirs, vampire bats and river dolphins, one third of the world’s bird species, 30 million insect types, 175 lizards plus more than 300 other reptile species such as the infamous anaconda in addition to the countless other known and unknown plant and animal species, are home to Brazil’s Amazon rainforest—all severely under threat today by the heavy deforestation of “The Lungs of the World,” which is largely credited to agriculture and cattle ranching. 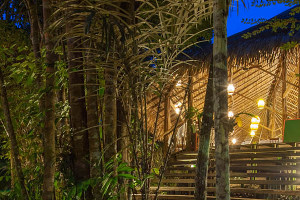 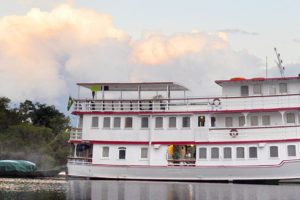